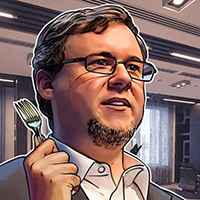 Jeff Garzik is a Bitcoin developer who took part in the core team working on Bitcoin’s source code from May 2013 to December 2014. In 2015, he cooperated with venture capitalist and entrepreneur Matt Roszak to found Bloq, a company that provides enterprise-class blockchain solutions for business. Besides that, the company also supports other Bitcoin-related innovations. Currently, Jeff Garzik is Bloq’s CEO. The latest news is all about Jeff Garzik’s United Bitcoin project, which is aimed to be a new hard fork of Bitcoin. UB is supposed to include many improvements, such as expanding size of a block to 8MB, protection against repeated transactions, etc. There are supposed to be 21 million issued tokens of UB, though the future of the project is still unknown.
ピックアップ記事
もっとビデオを見よう チャンネル登録
もっとビデオを見よう チャンネル登録
広告